What I Learned From Watching The 2019 Wimbledon Men’s Final

I had the privilege and fortune to witness possibly the greatest Wimbledon Final in history on Sunday. To be a spectator at Wimbledon for the Men’s Singles Finals 2019 was the accomplishment of a childhood dream. Inspired while watching the greats like Borg, McEnroe, Connors and Becker as a young boy on TV while growing up in NZ.

Here is what I learned from watching two of the greatest tennis players of all time battle it out for 5 hours on centre court and how that applies to get the best out of yourself and others:

Composure – Both players were perfect examples of composure for 95% of the match. It takes skill and training to stay that calm under pressure for that long. Not staying calm and composed leads to losing energy and poor performance. To perform under pressure when it matters the most you have got to stay cool.

Belief/Confidence – to play consistently well for 5 hours with the minimum of errors, self-belief is super high. No matter what your job is if you want to do it well you have to believe in yourself and your capability. This must be practiced and cultivated within. Without it, you are lost.

Presence – the players’ abilities to block out distractions of the crowd, bad line calls, even their own negative thoughts and stay present in the now was outstanding. Harvard Business Review in a recent study found that there was one character trait above all that made leaders inspiring – Presence.

Preparation – both physical and mental preparation were key. Both players kept up their performance under relentless pressure and demands. They were resilient and endured all that was thrown at them. To be prepared for the demands of your role is a must. Champions are made when no one is watching.

Courageous – The execution of both players throughout the whole match was astounding. They were fearless and never held back, for example when Novak saved two match points in the 5th set. The class of shot-making was from another world. You can’t win unless you are prepared to lose, courage comes in embracing that and being fearless.

Watching the after-match press conference with Novak, the reporters all asked him questions that revealed insights into his mental game and how that helps him perform. Here are three key things that he shared:

Novak practices visualisation, there is a power in this to prepare his nervous system for different scenarios. He sees himself playing better than his opponent as well as things that could happen in the match. The NZ All Black Rugby team do the same thing. When the pressure comes on you are then prepared for it and can rise to the occasion.

As much as there is a battle going on with the ball and in the game, Novak talks about the inner battle that is going on inside him. There is more going on that what the spectators can see. The skill is to master what you are experiencing in the match by determining how you experience them. How you accept what happens and how you live through the experiences supports you in staying calm, focused and present or not. One way allows you to play to your best.

Huddle up with your team today and pick one character trait that will help them be better performers. Ask them the question: How can you better improve this quality in your life and career today, next week? 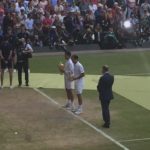